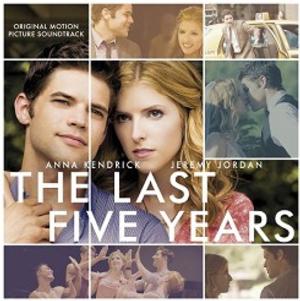 “Yes he's insane, but look what he can do"

No word of a lie, it’s extremely difficult to listen to the soundtrack of 2015’s movie adaptation of The Last Five Years without being utterly seduced by the personas of its stars Anna Kendrick and Jeremy Jordan and their hugely empathetic performances. I really enjoyed the film, not least because it managed to take a show I already knew and loved and spin it, just ever so slightly, into fresh and new.

Jason Robert Brown’s musical is a two-hander about a single relationship told from two perspectives – we get Jamie’s viewpoint in chronological order and we get Cathy’s in reverse, their narratives only connecting at one crucial moment in the middle. Stage productions thus often have the couple not interacting at all, save for that one scene but where the film excelled was in expanding their world to allow not just more people, but each other into their storylines.

To be sure, the structural integrity of the score remains intact, nothing has been changed dramatically or musically for that matter but somehow, its emotional world has been enriched and enhanced. This is none more so noticeable than in the crash bang wallop of ‘A Part of That’ into ‘ The Schmuel Song’ into ‘A Summer in Ohio’. Kendrick perfectly nails the bruised emotion of the first and the glorious grandstanding of the last – her voice expanding beautifully into the character’s first expression of pure joy.

But its Jordan’s take on ‘The Schmuel Song’ that stands out for me, a number I’ve tended to tolerate onstage rather than enjoy, here it is dialled back from its sometimes showboating style to a tenderly storytelling moment that is deeply, powerfully connected to the woman he loves and to whom – in the film - he is singing directly. It transforms the song into something simultaneously sweet and sexy, a genuinely romantic gesture that shines on record as much as it did on film.

This heightened emotionality is threaded throughout the entire recording to beautiful effect, leaving us in no doubt to the pain and anguish that these two are causing each other in amongst the seducing and schtupping. Fresh new arrangements add to this more pronounced feel, making this a worthy accompaniment to the legit stage recordings of The Last Five Years.