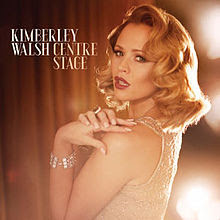 Girls Aloud star Kimberley Walsh released her debut solo album in 2013 and eschewing the pop efforts of her colleagues Nuhdeen, Cheryl and Nicola, she opted for a collection of musical theatre songs. Centre Stage thus capitalised on her appearance in Shrek as Princess Fiona but aiming so firmly for the middle of the road with a tragically uninspired track selection leaves it a rather dull album to listen to, no matter how pleasant her voice is.

So we get the likes of Andrew Lloyd Webber’s ‘Memory’ (out of her range), Wicked’s ‘Defying Gravity’ (also out of her range), and Les Misérables’ ‘On My Own’ which pass by far too blandly with arrangements that are too close to muzak for comfort. They should be thankful though, as West Side Story’s ‘Somewhere’ and Oliver’s ‘As Long As He Needs Me’ are misguidedly given the cheesy easy listening treatment which may well actually be a criminal offence on Shaftesbury Avenue.

There’s more success in more relaxed songs that suit the lower end of her register – album opener ‘One Day I'll Fly Away’ is a case in point here, a gentle ‘Another Suitcase in Another Hall’ also shimmering nicely as does ‘Hushabye Mountain’ (although that’s a hard song not to do well). And the duets are chosen well, Ronan Keating accompanies her on a skip through Once’s ‘Falling Slowly’ and Louise Dearman brings real class to Miss Saigon’s ‘I Still Believe’.

And as is the way of things in the digital age, bonus tracks are shunted off onto deluxe editions when by rights, they should be on the album proper. Subtle acoustic takes on Blood Brothers’ ‘Easy Terms’ and the Gershwins’ ‘Someone To Watch Over Me’ prove her the good singer she is and very much play to her strengths. Ultimately though, the pitch perfect Alias Club Mix of ‘One Day I’ll Fly Away’ proves her natural home is on thumping pop songs in gay clubs.