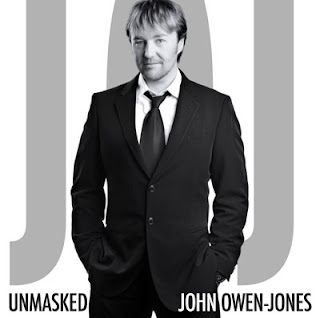 “You are going where I long to be"

I have really enjoyed John Owen-Jones’ recorded output – his self-titled debut and 2015’s Rise both impressing with their forays into new musical theatre writing and interesting arrangements. It’s taken me a little while to get around to his 2012 album Unmasked and I have to say it does feel like a little bit of a relative disappointment for me, not so much in terms of its quality but rather in its lack of adventurousness.

Three Andrew Lloyd Webber songs, a bit of Sondheim, West Side Story’s ‘Somewhere’, Les Mis’ ‘Bring Him Home’ again (it’s appeared in one form or another on all his solo albums), there’s little to really pique the interest above and beyond what one might expect from a musical theatre star who has delivered successfully in many of these key roles. Along with standards like ‘Nature Boy’ and ‘Hallelujah’, the template thus appears quite fixed.

Which is fine in terms of Owen-Jones delivering what his fans surely want – powerful Phantom numbers like ‘Music of the Night’ and Love Never Dies’ ‘Til I Hear You Sing’, and bombastic Bond anthems like ‘Thunderball’ and oddly enough, ‘Nature Boy’. His control over the power in his voice is expertly done but is perhaps a little overdone for my liking – Nilsson’s ‘Without You’ is another classic example of an opportunity seized to rattle the roof.

So it’s the deviations from the script that intrigue me the most. An acoustic take on Queen’s ‘Love of my Life’, switching up the material with a lovely version of ‘Down to the Sea’ from Benny Andersson and Björn Ulvaeus’ Kristina från Duvemåla, this is the side of John Owen-Jones I like the best and I think it is one that he showcases better on his other two albums than he does here.