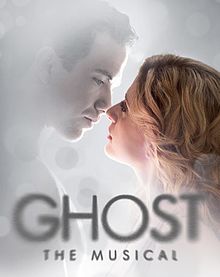 “This is always such a rush"

Some musicals are slow-burners. They may not hit you with their full force on first viewing but rather repay revisits and repeated listens to cast recordings to unfurl the depth of their appeal. So it was for me with Legally Blonde, and also with Ghost the Musical – a show I saw twice in the West End and again on its 2013 tour, liking it more and more each time.

And a large part of that was the way in which Glen Ballard and Dave Stewart’s pop/rock-based score took its time to sidle its way into my affections, not necessarily the kind of music that would appeal to me but ultimately proving irresistible in its finest moments. And it is remarkably diverse too, pulling in from a wide musical palette whilst stamping out its own identity as something refreshingly different from your typical musical theatre score.

So there’s a gently acoustic vibe to songs like the romantic ‘Here Right Now’ and more pragmatic ‘Life Turns On A Dime’ with leads Richard Fleeshman and Caissie Levy both sweetly impressing, a more frenetic energy to Oda Mae Brown’s numbers, especially the disco-ish ‘Talkin’ Bout A Miracle’ which the excellent Sharon D Clarke knocks out of the park, and downright oddities like ‘Focus’ and ‘Ball of Wax’, the latter of which which has now been rightly excised from the touring version of the show.

For me, the highlight of the score comes slap bang in the middle as either side of the interval, things become beautifully angsty. Standout ballad ‘With You’ is gorgeously essayed by Levy, leading into the sprawling splendour of ‘Suspend My Disbelief/I Had A Life’ which soars into the interval. And once we come back ‘Rain/Hold On’ maintains that emotional intensity in its almost rock-opera stylings.

Throw in the repeated musical motif of ‘Unchained Melody’ which is excerpted and interpolated at key moments, none better than the shimmering gorgeousness of the tear-jerking finale, and it becomes a cast recording that richly rewards replays and which is perhaps even better than the show from whence it came.