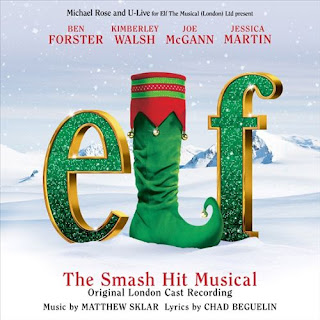 “You gotta remember that December is the time for glitz"

I have to say I was sceptical about Elf the Musical, not least because it was Bonfire Night (5th November for you heathens) when I saw it but to my pleasant surprise, I was soon won over by its classic charms. If you’ve seen the film, then you’ll know that its soundtrack was a dip into the Christmas chapter of the Great American Songbook – Ella Fitzgerald’s ‘Sleigh Ride’, Ray Charles’ ‘Winter Wonderland’ etc – but the score for the musical is original yet pays great homage to those standards.

Matthew Sklar’s music and Chad Beguelin’s lyrics succeed by being entirely both warm-hearted and open-hearted and in this recording, is powered by the practically Duracell-bunny-like enthusiasm of Ben Forster’s Buddy, the kid who found his way into Santa’s bag of presents and ended up being raised at the North Pole. The heart of the story is his re-entry into the human world to find his birth father and in tracks like ‘World’s Greatest Dad’, you realise just how big and real his emotions are.

And that feel-good feeling is carried across the whole record – Jessica Martin as his mum matches him for sincerity in both ‘I’ll Believe in You’ and ‘There Is A Santa Claus’, Kimberley Walsh’s velvety smooth voice sits well as sceptical love interest Jovie in Never Fall In Love (With An Elf) and the big band feel of Stuart Morley’s musical direction keeps ‘Nobody Cares About Santa’ from ever getting too dark for the (big) kids. Indeed in a world where things are often ‘Sparklejollytwinklejingley’ , everyone is a winner.

A strong cast recording that definitely bears repeated listens to its classic song-writing – it’s not just at Christmas that “singing loud for all to hear” spreads cheer.