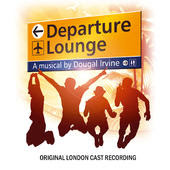 “He was in a right state, well he’s a lightweight”

Dougal Irvine was recently in town with The Buskers Opera at the Park but the first of his shows that I saw was Departure Lounge, back in 2010 at the Waterloo East Theatre. A rowdy tale of four British teenaged lads delayed in Malaga Airport’s departure lounge, reflecting on the past week’s drunken shenanigans, the quartet come to realise that their trip has actually been a real rites of passage job, in more ways than one.

Scored for acoustic guitars yet still managing to pull in a wide range of musical influences, Irvine’s music stands up to the test of time pretty well. He clearly knows his way around a hummable melody with a raft of catchy choruses and with his four strong singers in Chris Fountain, Jack Shalloo, Liam Tamne and Steven Webb, takes full advantage of the close harmonies that simultaneously master and mock boyband clichés.

Listening to the recording though, it’s interesting that a couple of key pieces of plot aren’t contained here in the music, referenced to slightly but dramatically absent in the main. Which isn’t a problem per se in the flow of the album especially for those who haven’t seen the show - you don’t miss what you don’t know after all. But it does mean that there’s a certain lack of heft to the music, when such key revelations are left in the book.

That said, the mixture of Britpop, flamenco, a bit of Country & Western, barbershop quartets, beatboxing and some serious power-ballading has the special allure of a Duty-Free Toblerone 3 for the price of 2 offer with all the nougaty promise inherent in such a purchase. A nice holiday treat.