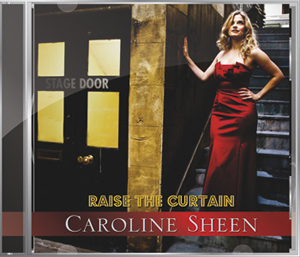 “It’s been fun hitchin’ up with a psycho like you"

Caroline Sheen is one of those performers you feel ought to be better known, having starred in some pretty major shows throughout her career yet never quite managing that breakthrough moment – no matter, she’s thus one of British musical theatre’s secret pleasures. Her debut album Raise the Curtain saw her capitalise a little on her bigger gigs – Mary Poppins, The Witches of Eastwick – but it also pleasingly gives plenty of airtime to new musical theatre writing too.

In fact there’s no less than 5 tracks which received their first ever recordings here, Sheen opting to use her talent to really shine a light on the contemporary scene, showcasing the music she clearly loves. So the likes of innovative composer Conor Mitchell gets his striking ‘What Did You Want From Love?‘ featured, Richard Taylor (now represented in the West End with The Go-Between) gets a beautiful song called ‘Higher’ on there, so too Grant Olding with ‘Carrie Makes A Decision’ from his show Three Sides.

So Raise the Curtain really does play like a little voyage of discovery, its treasures coming from more obscure sources and no less powerful for it. A song cut from The Witches Of Eastwick in previews – ‘Isn´t This What Every Woman Wants?’ – is a revelation of tenderness and character, Adam Guettel’s 'The Light In The Piazza' dazzles with its brightness,, Jason Robert Brown’s ‘Mr Hopalong Heartbreak’ raises a smile with its perky sense of self-realisation.

Sheen’s consummate musicality shines through regardless of how well known the material is, simple piano-based arrangements allowing a great clarity of purpose, whether on Grey Gardens’ ‘Will You?’ or Just So’s perfectly plangent ‘Wait A Bit’. And a cheeky bit of the personal touch comes through on the bonus track, a duet with husband Michael Jibson on Dirty Rotten Scoundrels’ ‘Nothing Is Too Wonderful To Be True’ by which point you’ll be frantically googling to find out where she’s on stage next (it’s Crazy For You at the Watermill btw).