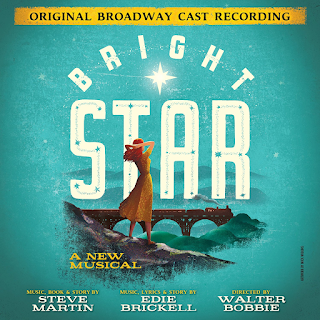 “If it don’t work out


You can turn around”


The cut-throat world of Broadway musicals takes few prisoners and even with a better-than-expected raft of key Tony nominations, Bright Star was extinguished after just four months of performances. Developed out of a musical collaboration between Steve Martin and Edie Brickell called Love Has Come For You, Bright Star forged its idiosyncratic path of bluegrass and other American roots music with an admirable confidence in bucking the commercial norm.

Taking a risk is always, well, risky though, and though I’m quite partial to a bit of country and always keen to see people pushing the boundaries of musical theatre, the Original Broadway Cast Recording does offer up some clues as to why Bright Star might not have caught fire. There’s no doubting the truthfulness of the music, played with a vast array of finely stringed instruments from banjo to fiddle to autoharp, but adherence to such an authentic song-writing template means you do get a sense of repetitiveness kicking in.

So the shiny brightness of much of the score bleeds into one song after the next and Martin and Brickell seem content to cultivate mood rather than meaning through their music, few of the tracks have genuine narrative drive to them, preferring instead to act as reminders to the plot and offering broad brushstrokes of characterisation rather than any real sense of insight or depth. That said, it’s tough to give a sense of 2 different timelines though music alone, as the show works its dual path.

There are moments when this does happen – Hannah Elless’ ‘Asheville’ is a glorious moment of musical theatre, an all-too-rare instance of when its unique power is harnessed for story-telling good, she also shines in a quiet diet ‘Always Will’ with AJ Shiveley. Bright Star’s stand-out performer is Carmen Cusack though, a Broadway debutant (another risk), expertly navigating an effective path between bluegrass and Broadway, the gently affecting ‘If You Knew My Story’ to the almost gospel fervour ‘At Long Last’.

A strong piece of music then, rather than musical theatre per se, in this format at least. The niche nature of the music means I don’t imagine we’ll see a major production of Bright Star in the UK anytime soon but a fringe production that is allowed to play a little with the show could well be the ticket.