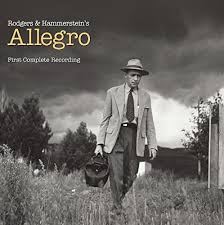 “He's just a lug
You'd like to hug
And hold against your heart."

It remains a source of constant fascination that we continue to find scarcely-known works by some of our most famous writers – Tennessee Williams had plays coming out of his ears but we’ve recently been treated to things like Arthur Miller’s rediscovered first play and in the world of musicals, the Southwark Playhouse will be bringing us the European premiere of a Rodgers and Hammerstein show of all things.

Allegro was written in-between Carousel and South Pacific and though the theatre is leading with the fact that it took the highest advance in Broadway history on its 1947 debut, it is less forthcoming about the decidedly mixed critical and commercial success it received. As such, it remains relatively unperformed and it took until 2009 for a first complete recording to be made of the score.

And who else would you turn to to accomplish such an exercise but leading lights of the Broadway stage such as Audra McDonald, Laura Benanti, Nathan Gunn, Nobert Leo Butz, Judy Kuhn, Marni Nixon, even Sondheim himself (who was a production assistant on the original show). Such luxury casting along with Robert Russell Bennett's arrangements for the Istropolis Philharmonic Orchestra thus make a virtue out of Allegro’s obscurity, revealing it to be a fascinating piece of musical theatre and a worthy addition to the R&H canon.

You can see why it might not have instantly appealed to contemporary audiences, it sees Rodgers and Hammerstein eschewing their normal showmanship and fantastical plotting for something much more intimate and introspective. It works as a large ensemble vehicle, big chorus numbers and dance sequences and an equitable split of songs between the cast rather than focusing them onto lead roles.

And it’s arguably as melodiously tuneful as any of their other scores. Benanti’s ‘Poor Joe’, Nixon’s ‘Winters Go By’, Kuhn’s ‘So Far’, ‘A Fellow Needs a Girl’, Patrick Wilson’s ‘You Are Never Away’ (I’m getting goosebmpy just typing the names!). Larger cast numbers like ‘Money Isn't Everything’ and ‘Allegro’ are great fun and Liz Callaway’s charismatic ‘The Gentleman is a Dope’ feels closest to a breakout number.

So musically, Allegro feels like a success to me, and I can’t wait to see it on stage later this month to find out if it works dramatically – I have high hopes.