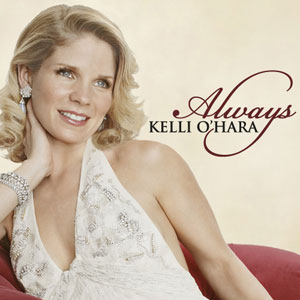 “Do you feel the kind of grace inside the breeze?"

Though my tastes are broad, I am an old-fashioned soul at heart and little fills me with as much joy as a classic soprano, characterising so much of what I love about musical theatre. One of Broadway’s finest is Kelli O’Hara, an actress so good that since her first Tony nomination for The Light In The Piazza in 2005, she has been so nominated for every role she has played since, culminating in a win last year with her sixth nomination for The King and I.

Her 2011 album Always reflects something of the choices made by her contemporary and fellow singer Audra McDonald in the way that it delves into the Great American Songbook with chapters both old and new. There’s several classics in there - Rodgers and Hammerstein, Lerner and Loewe, Sondheim - from shows she has been in and others besides, but also a fair few new musical theatre writers too, reflecting the breadth of the career she has pursued.

So an elegant glide through ‘Something Wonderful’ sits alongside a no less heartfelt ‘How Glory Goes’ from Floyd Collins, the under-rated Ricky Ian Gordon’s ‘Once I Was’ is placed on a par with Irving Berlin’s ‘Always’, and the timeless yet versatile quality of O’Hara’s hugely impressive voice unites them all, Dan Lipton’s arrangements wisely keeping things uncomplicated to highlight the purity of the interpretations here.

There’s also a sense of the playful side of her personality coming through too, repurposing She Loves Me’s title track into ‘He Loves Me’ and putting her own stamp on other songs written for male characters – Sondheim’s ‘Finishing The Hat’ and an utterly gorgeous take on South Pacific’s ‘This Nearly Was Mine’. The sole original track ‘They Don't Let You In The Opera (If You're A Country Star)’ also reveals a gift for comedy but the real joy comes in O’Hara’s compelling assertion of her status at the forefront of Broadway’s current stars.