Review: DiaoChan - The Rise of the Courtesan, Above the Arts 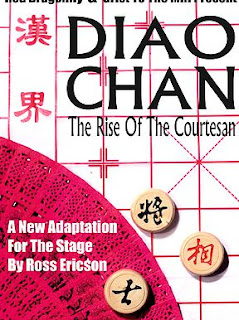 "Was woman not created equal to man?"

DiaoChan - The Rise of the Courtesan offers a rare opportunity for London audiences to delve into Chinese classic theatre, with Ross Ericson's free adaptation coming from part of Romance of the Three Kingdoms, acclaimed as one of the Four Great Classical Novels of Chinese literature and among the oldest novels in the world. So it aims to be an epic piece of storytelling but this Red Dragonfly/Grist To The Mill production, also directed by Ericson, actually works best in its more human, intimate moments.

As the Han Dynasty comes to a violent end, ambitious general DongZhuo seizes power in 189AD by installing a mere boy on the imperial throne and rules by default as chancellor, protected by his adopted son, the great warrior LüBu. Among the few who oppose him is the government minister WangYun but it takes the enterprising nous of a singing girl in his household named Diaochan to come up with a plot to defeat their enemies and simultaneously secure her rising position in society, breaking out of the usual limited historical roles for women of courtesan and concubine. 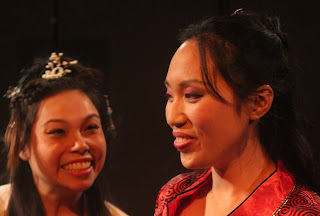 And Michelle Yim as DiaoChan gives us a charismatic leading performance, full of wry wit and skilful observation at how best to advance her position. This she does by tying her would-be suitors into knots with their own words, whether the handsome but verbally lumbering LüBu (a lovely turn from Arthur Lee) or the older, sharper but too easily manipulated DongZhou (a nicely long-suffering Angelo Paragoso). And the unexpected twist of Siu-see Hung as DongZhou's mother is initially disarming but ultimately successful in heightening the domestic tragedy.

But there's an unevenness to the rest of the production that doesn't always support this central trio. Ericson infuses a nice deal of humour and bawdiness into his storytelling but is less successful when he strains for poetic resonance in sporadic ventures into verse and soliloquys, the set design of movable screens is well-conceived but less well executed (good costumes though), and the performance level isn't always consistent, which given the small cast and the amount of Machiavellian double-dealing going on is pretty much necessary.

That said, DiaoChan - The Rise of the Courtesan is still a fascinating look into an underexplored (in this country at least) tradition of storytelling and a welcome boost to the British East-Asian theatre scene.

Running time: 2 hours (with interval)
Booking until 28th May 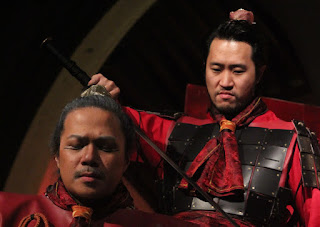