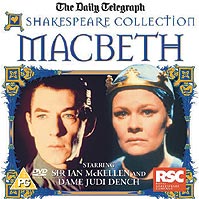 “Round about the cauldron go”

Who’d’ve thought that it would be a production from 1979 that would be one of the most enduringly successful translations from stage to screen. It helps immensely of course that this RSC production of Macbeth features a couple by the name of Ian McKellen and Judi Dench as its central lovebirds, with a young gentleman named Trevor Nunn on directorial duties at a point when playfulness didn’t seem like a dirty word to him.

The original production from 1976 played in the round to small audiences at The Other Place and Nunn recreates that intimacy by keeping his company on a circular set and keeping (mostly, one imagines) to the theatrical devices used, rather than employing anything too cinematic. So we’re left with what feels like pure Shakespeare, exceptional actors doing little else but acting as if their lives depended on it and holding the audience utterly in the palms of their hands.

McKellen is magnificent as Macbeth, his slicked-back hair and smooth presentation unable to mask the slow descent into madness that comes from his own appalledness, and Dench makes an astonishing Lady Macbeth, gripped by her own psychosis which manifests shockingly and yet still affectingly. Around them, the gloomy darkness hides a multitude of sins and haunts with a trio of genuinely creepy witches.

It’s so good you even forgive Angus and Ross being a frightful looking Duncan Preston and Ian McDiarmid, the latter doing excellent double duty as the Porter, and a youthful Greg Hicks is around as Donalbain and Seyton. The DVD was given away free with a newspaper to celebrate another Shakespearean anniversary or somesuch so you should be able to pick it up in any charity shop and I’d highly recommend doing so.