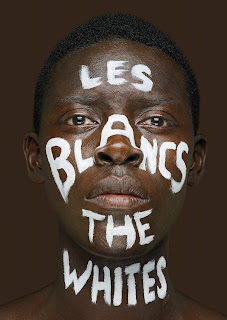 "Do you think the rape of a continent dissolves in cigarette smoke?"

To think that just a couple of weeks ago, I hadn't ever seen a play by Lorraine Hansberry and now I've seen two - the extraordinary A Raisin in the Sun which has now completed its UK tour and this new production of Les Blancs at the National. The sad reality is that there isn't much more to see now, pancreatic cancer taking her life at just 34, but what a startling legacy this writer left of theatre that delves uncompromisingly into issues of race and identity, that remains as pertinent today as it did the mid-twentieth century when she was writing.

Hansberry didn't get to complete Les Blancs before her death and so this final text was adapted by her sometime husband and collaborator Robert Nemiroff and it is directed here by Yaël Farber, making her National Theatre debut after her highly acclaimed 2014 The Crucible for the Old Vic. And people who saw that production will instantly recognise Farber's modus operandi as this show opens in a highly atmospheric manner - a group of matriarchs, led by musical director Joyce Moholoagae, chanting and singing in Xhosa to leave us in no doubt what continent we're on.

But though it is Africa, Hansberry set her play in a fictional country, a nation bristling under a colonial rule that is fast fading but riven by internal crises too, as the uncertainty of a post-colonial future looms large. At three hours, it lingers long but remains taut as a drumskin throughout with its searching questioning about what happens in revolution, when even a single family can find itself on opposing sides and written with such clear-sighted frankness as it is here, the play unleashes a deep and complicated sadness at such a troubled and yet still unresolved part of our collective history.

Tshembe Matoseh (Danny Sapani) has returned to the village of his birth to bury his father but the reunion with his two brothers serves to show how far apart their lives have drifted. Intellectual Tshembe has travelled the world and settled in England with a wife and child, Abioseh (Gary Beadle) stayed put and influenced by the settler-run mission in town has become a Catholic priest and Eric (Tunji Kasim) - technically their half-brother - cleaves closer to the radicalised spirit of their father. Tshembe tries to keep his powder dry but as a volatile situation is further inflamed into civil war, loyalties have to be declared.

At the same time, US journalist Charlie Morris (Elliot Cowan) is looking into the staff of the missionary hospital and so we see different sides to the story of occupation, of the ostensible benevolence and officious brutality that goes hand in hand. In one of the show's most aching moments, Siân Phillips' Madame Nielsen recounts her journey to this land as a young newlywed full of hopes and dreams, that naïveté slowly shattered by the harsh realities of imperial life as revealed by Morris' investigations, a mature performance of graceful integrity from Cowan.

But it is with the Matoseh brothers where the discomforting drama lies, Sapani giving an utterly captivating turn as the conflicted Tshembe, unable to extricate himself emotionally from that which he has removed himself physically, and nailing the troubled intensity of a man coming eventually to the boil. Beadle and Kasim support him well and Sheila Atim, as the silent Woman, displays a formidable physical presence as the spirit drawing him back to a homeland that cannot, will not, let go.

Farber lets this all play out in a brooding world of real volatility, shadowy figures forever encroaching on the edge of Soutra Gilmour's sparse but pointed design. Adam Cork's soundscape menaces throughout whether in the crack of a rifle or the pounding of drums from afar and his music, which is equally threaded through the show, is a powerful, additional texture of real difference. It's taken me a shamefully long time to discover Lorraine Hansberry's work, don't make the same mistake while this extraordinary production of Les Blancs is on.