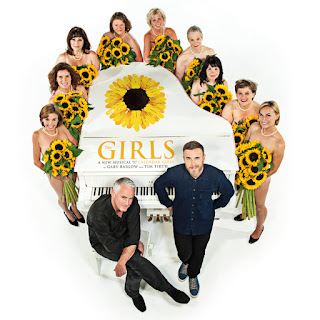 There's not many people I'd let have a guest review on here but Robert Foster, aka my father, is certainly one of them. I was (pleasantly) surprised when he (and my mum and Aunty Jean) declared that they had really enjoyed The Girls in Manchester and so I thought it would be fun to contrast our reactions - here's my own review from Leeds and read on for his.

"Look in the eye of your dear fucker uppers"

There cannot be many of you out there who do not know the real-life story of the Calendar Girls. It made national news at the time; the film has been around for more than a decade; and the stage play followed not long behind. Now, author Tim Firth has joined forces with Gary Barlow of Take That (a popular beat combo, m’lud) in a musical version, which mysteriously has shed the ‘Calendar’ and is just called The Girls. For those recently returned from Mars, the story is set in a small Yorkshire town where Annie loses her husband, John, to cancer. Her best friend, Chris, and other Women’s Institute friends rally round to find a way to pay tribute to the man they all loved and decide on a nude calendar. The profits will buy a new settee for the Relatives Room at the hospital where John was treated.

Could this story stand yet another retelling? Well, my answer is a resounding if slightly surprised yes. Firth and Barlow have created a richly entertaining evening, at times gentle, sad and moving whilst being overwhelmingly joyous and funny.

However, anyone who expects to hear a series of blockbuster Gary Barlow pop songs will be disappointed. The music is good and features some lovely melodies but its main achievement is how skillfully it works with the script to add a new dimension to the story, taking the narrative forward whilst encapsulating the humour and sadness and allowing the characters to express their innermost thoughts and feelings. In this sense, it is more of a play with songs than a true musical.

As to the performers, Joanna Riding and Claire Moore are outstanding in the lead roles of Annie and Chris, yet the real strength of the cast is its collective excellence. The other members of the WI do a superb job of portraying ordinary women doing something extraordinary as the prospect of appearing nude forces them to assess their own relationships and inner uncertainties. The calendar shoot scene was brilliantly played by all the women; it was elegant, tasteful and, above all, hilariously funny.

The men, although secondary to the main theme, all have their moment in the spotlight and the three teenagers (a lively trio of relative newcomers in Chloe May Jackson, Ben Hunter and Josh Benson) get some of the funniest scenes - the song where they reflect on the damage inflicted on them by their parents ("Look in the eye of your dear fucker uppers") brought the house down.

The direction is sharp and pacey and the audience’s emotions are kept constantly on the move as humour follows sadness follows humour. In one of the hospital scenes, you’ve just had time to shed a tear as Annie starts to come to terms with her imminent loss when Chris arrives in a stolen wheelchair boasting: "You’ve no idea how quickly I just got served in this".

The set design is striking, with drawers, cupboards and cabinets painted green and stacked on top of each other so that they can be climbed to create the Yorkshire Dales (such as when John finally succumbs to cancer) or opened to provide entrances and exits. This includes two scenes featuring my choice for the little-known Prop of the Year award, an authentic 1960s Morris Minor van.

I suppose that, if I really tried, I could find some things to criticise – but I think it would just be curmudgeonly. The Girls has played to packed houses and nightly standing ovations for its entire run at the Lowry. North West audiences clearly know an uplifting, feel-good story told with wit and humour when they see it, and who am I to argue?