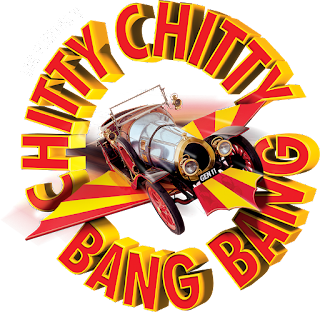 “Scrumptious as the breeze across the day”

Who knew that Leeds would be a musical theatre hotspot this December but between The Girls and this Music & Lyrics and West Yorkshire Playhouse production of Chitty Chitty Bang Bang, it’s been the place to be for big, warm-hearted musical fun. This is the first new version of Chitty Chitty… since its original 2002 West End production and its many regional tours but in James Brining’s clever and wondrous adaptation, it’s thoroughly revitalised and as lovely as any cherry peach parfait.

Ian Fleming’s novel was adapted by Jeremy Sams, via Roald Dahl and Ken Hughes’ own reshaping of the story for the cinema, and with a glorious score from the Sherman Brothers (as if they could do any other kind) beefed up with new songs by them as well, it captures much of the Disney noir feel of the film whilst bringing its own depths too. I’d forgotten how much sadness there was in the tale and that’s something Brining never lets us forget, even whilst delighting us with flying cars and fun.

Jon Robyns is ideally cast as Caractacus Potts, a marvellous mixture of melancholy and magic, and with Amy Griffiths as an excellent, empowered Truly Scrumptious, there’s a beautiful delicacy to their work, epitomised by her ‘Lovely Lonely Man’ that I adored. At this performance, Harry Kent and Caitlin Surtees as his children Jeremy and Jemima were both vibrantly assured performers and given there’s a year-long tour ahead (for some of them at least), signs look positive for surviving the choppy waters of regional touring.

With such songs and such a company (Sam Harrison and Scott Paige’s henchmen are excellent too), there’s much to love but Brining’s real coup emerges in the staging though. Simon Higlett’s design and Simon Wainwright’s projection work is just inspired, allowing for hugely theatrical rollercoaster moments of flight and genuinely disturbing imagery surrounding Stephen Matthews’ brilliantly eerie Childcatcher – the whole thing meshes together more effectively. I wanted to see it again as soon as I left and with dates stretching through to January 2017, I might just do that!