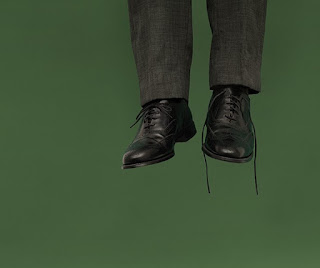 “Don’t worry. I may have my quirks but I’m not an animal. Or am I? One for the courts to discuss.”

The term ‘dark comedy’ is much abused but there really is no better descriptor for Hangmen, Martin McDonagh’s long-awaited return to theatrical writing. Set (mostly) within the tobacco-stained walls of a proper boozer in Oldham in the 1960s on the day that Britain has abolished the death penalty, landlord Harry’s (the excellent David Morrissey) past comes back to haunt him in a big way. For he was the last hangman in the country, as evinced by a cracking prologue (that isn’t for the squeamish) that sees him and his assistant Syd go about their business.

The arrival of enigmatic Londoner Mooney (Johnny Flynn never better) is the catalyst for the plot, as Harry’s disaffected daughter becomes easy prey to his professed affections and disappears with him, round about the same time Syd reappears in Harry’s life to say something rum is going on with a serial killer who has a Southern accent. But the real joy is in the motley crew of grizzled regulars who gather in the pub and the cracking dialogue McDonagh gives them as they dance around the morbid curiosity that has called them to this pub rather than any others.

With zero concern for anything vaguely PC but equally no sense of rose-tinted nostalgia either, McDonagh’s writing is a bracing blast of cigarette-scented air that is unrelentingly funny, even as the screws of Matthew Dunster’s production tighten with the plot twisting and darkening pretty much from the word go. Morrissey captures wonderfully the arrogance of a man unwilling or perhaps incapable of relinquishing the past, the confrontation with bitter rival (and now fellow publican) Pierrepoint is a real highlight thanks to John Hodgkinson’s striking cameo.

The whole cast is top-notch though – Ralph Ineson’s police officer, Bronwyn James’ assured debut as ‘mopey’ daughter Shirley, Reece Shearsmith as the impossibly nervy Syd and best of all for me, Sally Rogers’ always-on-edge Alice, Harry’s wife and Shirley’s mother, a vital presence in the play and a masterclass in reactive acting, I simply couldn’t take my eyes off her for the majority of the second half, so engrossed in her performance was I. A corking design from Anna Fleischle frames the whole thing perfectly, no wonder the transfer to the West End has already been announced.