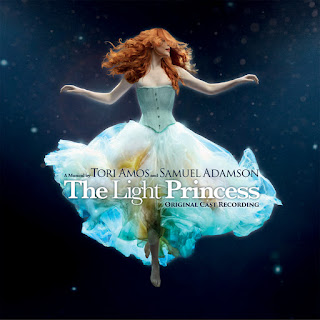 It’s been a goodly time coming, just over two years since it opened actually, but the Original Cast Recording of The Light Princess is finally here. Finely crafted by writers Tori Amos and Samuel Adamson with the original cast from the National Theatre production and recorded entirely under studio conditions, this double CD a triumphant achievement. It simultaneously acts as a perfect tribute to a much-loved show (one I saw five times during its too-short run #1, #2, #3, #4, #5), it also advances the score, refining its musicality into a more intense yet accessible experience.

Right from the opening bars of the ‘Prologue: Once Upon A Time’, Katherine Rockhill’s piano playing sounds amazing and is rightfully forefronted here as the cornerstone of Amos’ wide-ranging compositions, the lushness of the strings sound pretty special too. And with Rosalie Craig’s astonishing performance as Althea - the light princess herself - liberated from the constraints of this most physically demanding of roles (both for her and for us too, goggling at the inventiveness with which her floating was essayed), her vocal interpretation deepens into something even more affecting, impossible as it may seem to anyone who saw her amazing work onstage. 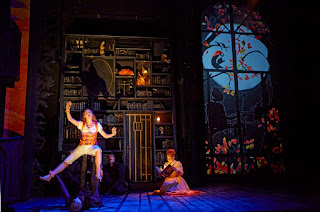 From the quiet giggle in the middle of the transcendent ‘My Fairy-Story’ to the glittering boldness of ‘Better Than Good’ (“I must say, he was one edible, delectable, muscular cake!") to the aching sadness of ‘Darkest Hour’ in all its swirling complexity, Craig is just perfect, never sacrificing emotion for power whilst exploring all the colours of this complex character. Her sexual and emotional awakening with Nick Hendrix’s highly charismatic Prince Digby is another delight, the playful sensuality of ‘Althea’ is nothing less than the musical embodiment of all the heady excitement of falling in love.

Such is the richness of the supporting cast that there’s barely a song that passes without some magnificent moment or other. Laura Pitt-Pulford lets rip gloriously in the martial drive of ‘Sealand Supremacy’, her vocal fireworks matched by Lagobel counterpart Malinda Parris in the more sinuous ‘Scandal’, reprises the same vital refrain. There’s real excitement every time Clive Rowe’s King Darius sings with his thrillingly daring vocal part, ‘The Whistleblower’ is just jaw-dropping, and it was a real pleasure to be reminded of the rich warmth of Amy Booth-Steel’s brilliant performance as Piper. 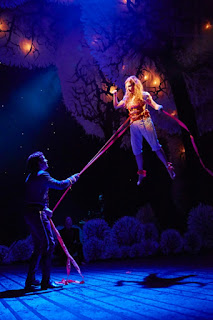 It’s hard to be objective about a show that I loved so dearly but finally being able to listen to the score again in all its re-orchestrated splendour, it seems scarcely credible that this music was so easily dismissed by many of the critics who visited. As with Sondheim (who, lest we forget, had difficult openings for many of his shows), the thematic complexity and deep musical intelligence is undeniable, it perhaps just asks different questions of listeners unused to atypically adventurous British musical theatre. In any case, the CD richly repays re-listening, the density of Amos and Adamson's world meaning that new details resurface every time,

From the "you are, you ares" of  'Althea' to the "ring out, ring outs" of the epilogue, the dramatic excitement of the full company engaging in 'My Own Land' to the piercing chamber-musical intensity of Althea's 'Tears', there's so much beauty to revisit in The Light Princess that I fell utterly in love with it all over again, surprising even myself. Rumours of a Broadway production abound and rest assured when I win the National Lottery I will use it to reunite this cast in my own personal theatre but in the meantime, this Original Cast Recording serves as a superlative record of a simply stunning piece of truly original musical theatre.