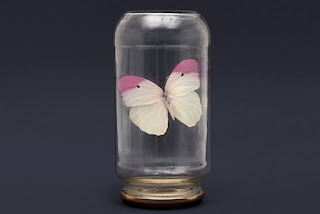 “A story that becomes true in the telling”

As a director who has put live pigs on the stage (in last year’s I’d Rather Goya Robbed Me Of My Sleep Than Some Other Arsehole), a certain degree of expectation now comes from a Jude Christian production but I don’t think anyone could have expected the brilliantly punishing lengths to which she pushes Lela & Co. Royal Court debutant Cordelia Lynn’s play is already a masterly piece of theatrical writing – essentially a monologue but one that is interrupted and challenged by other voices, questioning the veracity of what is being told.

In the glitzy world of Ana Inés Jabares-Pita’s set, caught somewhere between circus and chat show, Katie West’s Lela begins the telling of her life story. A torrent of words flow from her like champagne bubbles from a glass, the effervescence of her descriptions of the rural traditions of her extended family life, dominated by the totemic figure of her father as the only man in a house full of women. But hints of darkness peek through even at this seemingly innocuous time and as her life takes a desperately tragic turn for the worse, Lela’s life (and by extension our experience) becomes an unforgettable journey.

On a trip to visit her married sister, she meets a handsome friend of her sister’s husband and quickly gets married in this foreign land. But as war breaks out in this unidentified region and ethnic tensions erupt, she finds herself exploited and increasingly brutalised in the most horrific of manners, the walls of her existence shrinking down to a single room. And Christian matches that claustrophobia by playing whole scenes in the pitch black, the fear and terror nearly overwhelming as West’s sensational - yet never sensationalised - performance guides us through the dehumanising gloom.

Oliver Fenwick’s lighting occasionally offers half-light –a candle lit here, a delicate glow from above there – but often what emerges from the shadows is more horrific than the pure darkness, it’s a marvelously discombobulating experience and one is that seared on my memory. Katie West really is beyond superb as her disarming directness challenges us to look away, to be that part of society that won’t or can’t acknowledge the atrocities of war, the moment when the tears finally come is one of the most genuinely distressing I've ever experienced in a theatre.

David Mumeni as the various men in Lela’s life is a dangerously seductive presence, a constant threat to her ownership of the tale she’s finally able to tell and as harrowing as it may become, there's also something therapeutic that emerges in the reclamation of her experience, in the reconstruction of a past that's needed in order to try and move on. Formally interesting in its construction, unforgettably visceral in its acting, fearlessly demanding in its direction, Lela & Co. might just be the best show I’ve seen all year.