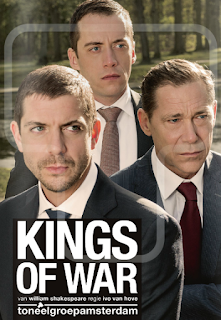 It’s instructive to look at how we (the British) look at Shakespeare compared to them (the Europeans), especially with rival treatments of the first tetralogy on the horizon. Whereas Trevor Nunn’s answer to the perceived issues of the Henry VI plays is to return to John Barton and Peter Hall’s adaptation from the 60s which adapted them, alongside Richard III, but still into three full-length plays. And then we have Toneelgroep Amsterdam’s Kings of War, in which Ivo van Hove adds Henry V into the mix, and still manages to be done in an evening (albeit 4 and a half hours later…!)

We’ll see how The Wars of the Roses pans out when it hits the Rose, Kingston in the autumn but Kings of War is alive and kicking at the Stadschouwburg in Amsterdam now and for sheer innovative thinking and intelligent reworking, it’s hard to see how returning to the RSC of the 60s will compare in any sense of the word. Liberated from any notion of textual fidelity or theatrical tradition (in terms of how Shakespeare ‘ought’ to be done, I mean), van Hove and his company infuse something genuinely new into the drama, a fierce modernity resulting from this unruly approach.

And it is really an adaptation, a tracking of the throughline of corrupting monarchical power on a single dynasty in the frame of the country pile from which they rule. Sections are divided by kings, so first we see Ramsey Nasr’s fervent Henry V marking the moral highwater that declines with Eelco Smits’ disinterested dweeb Henry VI (all three parts effectively condensed into an hour) and hits rock-bottom with Hans Kesting’s superbly insane Richard III, the evening’s most mesmerising performance. 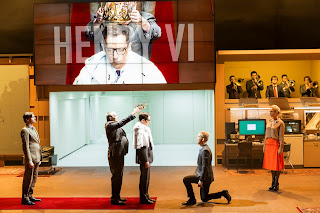 This is modern leadership being examined though, so live video is back with a vengeance and utilised extraordinarily well, reminding us just how much contemporary politicians rely on recorded media to manipulate their message (and by implication their subjects) but also to expose the subtlest of emotions on the actors’ faces – no waiting for an NT Live broadcast here... Jan Versweyveld’s design facilitates this well, clearly evoking the control rooms of modern warfare as well as the trappings of the good life.

Set to a stunning soundtrack of Eric Sleichim’s compositions for Steve DuGardin’s countertenor and the trombone quartet BL!NDMAN [brass] and full of the kind of visual excitement and spatial awareness (van Hove’s positioning of his actors is like the ultimate game of human chess) that is just too rarely seen on British stages, Kings of War is startlingly good and will be a welcome visitor to the Barbican next year.

Running time: 4 hours 30 minutes (with interval)
Photos: Jan Versweyveld
Returns to Amsterdam 18th December, goes to Paris in January, back to Amsterdam and then the Barbican from 18th April 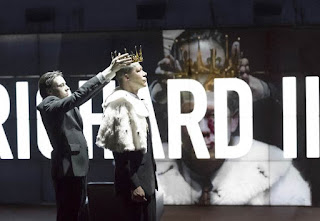