A bit belated but I'm pretending that it was always my intention to coincide with International Women's Day... Back in January of last year, I decided that I would conduct a year-long gender audit on my theatre-going - recording the number of women both working in and on the shows that I saw. As a statistical exercise, there's no pretending that this is a representative sample of anything in particular - it is simply the 383 productions that I saw in 2014 in London, elsewhere in the UK and beyond (but not Broadway) - repeat viewings of shows and all. Initially, I started off just booking everything as I would have done normally but I do have to note that as the year progressed, and these statistics mounted up in the monthly tallies (which you can read here), I did find myself consciously avoiding shows that had all-male casts.


But with a total of nearly 400 pieces of theatre included here, I think it is interesting to see what numbers the data threw up. In lieu of the the Bechdel Test, I recorded how many shows had 50% or more women in their cast, with a grand total of 164 out of 383 or 43% reaching that marker but of course, this doesn't indicate the quality of the female roles at hand. What is interesting - and this will be something of a recurring theme - is the range sits within the 30%-52% bracket, suggesting something of a tendency here.

Likewise with the actual numbers of women in the casts, where the percentage total comes out again at 43%, the range is actually slightly smaller here 37%-50%. Whereas I only managed one month where there was actual parity and not a one where there was a majority of women on the stages I visited, that average of just over two-fifths suggests the imbalance isn't - dare I say it - perhaps insurmountably huge...

But when we drill down on the creative side, it becomes abundantly clear where the sector has representational issues (and thus we may need to call Joan...) I tallied writers (and co-writers, adaptors etc), directors, designers, lighting designers and sound designers where they were cited (the number in brackets in the header of the table below indicates how many shows I was able to source the info for, out of the 383 that I saw). The data has been put into bar charts too as I wanted to see if I could remember how to do it.

So here we can see that women are best represented as designers and directors, though still averaging at well under 50%. Writers check in further down the scale at 31% and lighting and sound direction languish at 14% and 16% respectively. 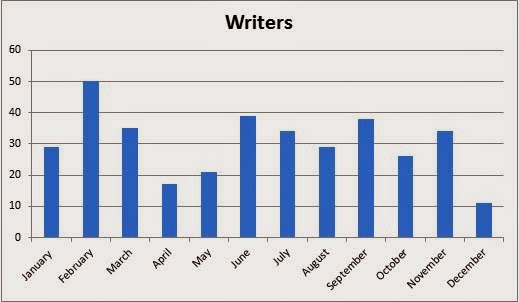 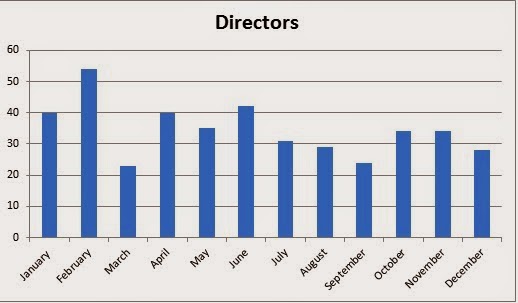 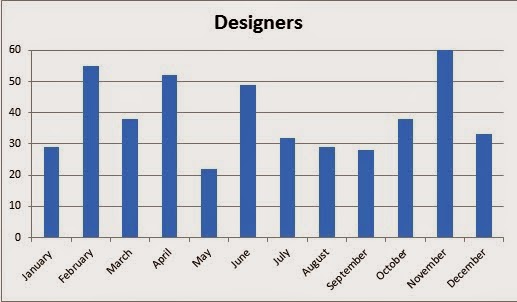 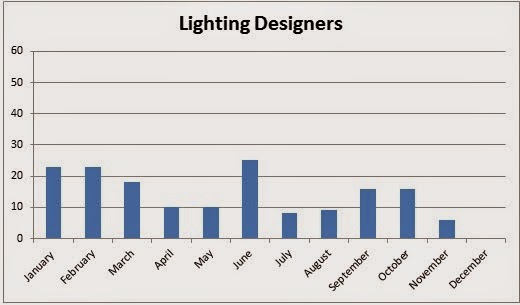 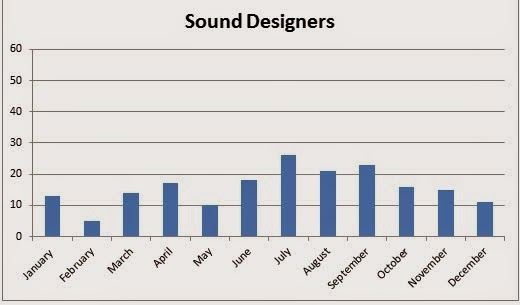 What does it all mean? How can we use this? Can we even use this? With such an academic exercise that is so inextricably linked to my own theatre-going and the decisions around it, it is worth making the point that there's nothing global that we can say with any real authority. But as an anecdotal study, I've found it quite instructive - as I hope others might do too - and it leaves me with questions for myself and my blog.

I've always been about diarising every aspect of my addictive theatrical habits on here, and hopefully promoting any number of shows in the process, but there's a wider sense of responsibility that I think I want to be a better part of now. Even with that in mind though, it is difficult to know what the best thing to do really is - do I impose strict quotas on my reviewing opportunities, thereby maybe denying myself some good stuff that happens to be all-male (My Night With Reg for example); or do I just stick with trying to improve the percentages for this year's theatregoing so that at least I've made some progress, or is that just chickening out of making substantive change?

And given that this particular exercise has just been about gender and doesn't touch on the equally pressing case for better ethnic representation in British theatre - something I'd love to report on in a similar fashion, though quite how I would get the data is anyone's guess - there's an argument to say that there's only so much one person can do with one blog. I reject that though, so I will be striving for something of a middle ground between the two above-mentioned paths - a bit of a cheat perhaps, and hardly a way to lead by example, but this way recognises the realities of my theatre-going (I love a gay play and am not prepared to stop seeing them) whilst acknowledging the need for a change as well.

I'll have to play catch-up as I'm not doing brilliantly on the figures for 2015 thus far but I'll be reporting monthly once again, so you'll be able to see exactly how I'm doing. And what about you? Do you think you have a responsibility for helping to change the gender balance of the theatre industry - as a theatre-maker, blogger or just a viewer - or are you just hoping it will sort itself out one way or the other...?