“That’s the cartoon show that they watch”


When did theatre get this exciting again? Love it or hate it, and the critical response that has come in today seems to run the full gamut, Anne Washburn’s simply extraordinary play Mr Burns can lay a bold claim to be just unlike anything else on a London stage at the moment. I was pleased to have avoided finding out much about it in advance, even if one particular surprise was spoiled for me on Twitter, coming to something so fresh is a rarity these days but even had I read the play from cover to cover beforehand, I don’t think anything could have prepared me for the experience of watching Robert Icke’s breath-takingly audacious production.

In all honesty, it is something that needs to be experienced to truly get it, I haven’t ‘felt’ a new play this much in ages, my reactions ranging from complete and absolute intrigue to slack-jawed amazement to hoots of laughter. Three distinct acts – all 40 minutes long – take us through the aftermath of some unspecified apocalyptic event in North America. Spread over nearly a century, Washburn muses on what the remnants of society’s reaction would be, what might survivors cling onto when hope is all but gone, what coping mechanisms would be developed to either distract from the horrors that have gone before or the uncertainty that lies ahead. 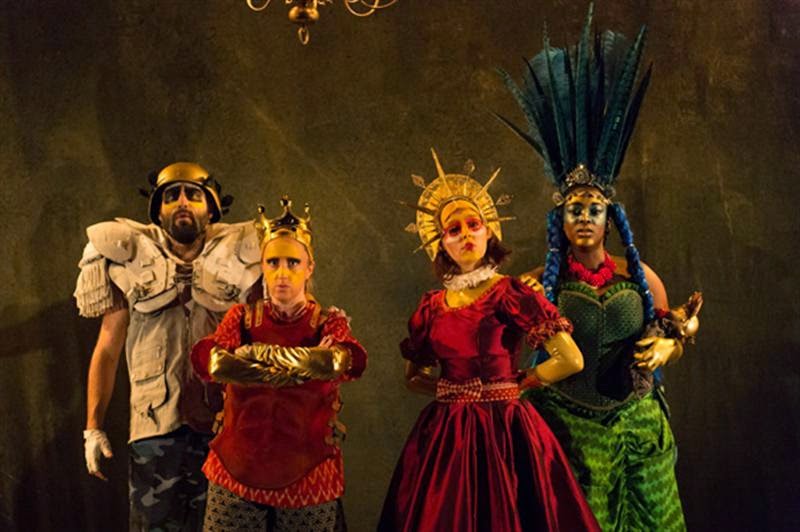 As it turns out, it is popular culture that provides the binding glue in this case and specifically here, The Simpsons. But though an appreciation of the US cartoon, the longest running sitcom in the world lest you forget, will clue you into some of the finer nuances contained within, it is far from necessary. For though the first section sees a group of survivors huddled round a campfire, zeroing in on one particular episode and trying to recall, recount, and replay it, the real focus lies in what they’re avoiding talking about, what is revealed in the asides and the pauses and eventually in the arrival of a stranger, who brings with him the news, or the lack of it, that they’re all hanging on.

Likewise, the shift to the second section where we see the same group seven years later strikes home on two levels. With the power plant network having collapsed, society has splintered into small groups who all make do and our group have become a performance troupe, acting out old Simpsons episodes, commercials and power-pop medleys not only just to eke out a living but to try and recapture the memories and sensations of a past that is quickly fading away as their collective present becomes increasingly threatening. And the final act – wowzers! The characters we’ve come to love are replaced with near-operatic grandeur and a further shift in tone that is shattering.

I was hooked from the beginning and thoroughly engaged throughout, the sheer inventiveness, not just of Washburn’s writing but also Icke’s direction is just something wonderful to behold. Tom Scutt’s costumes and Orlando Gough and Michael Henry’s score really come into their own in the final act, Philip Gladwell’s lighting does amazing work in three completely different scenarios and Scutt’s conceptual design rightly keeps us on our toes and ready to gasp at the next revelation. And that cast – they’re all my favourites but Adrian der Gregorian, Annabel Scholey and Jenna Russell probably edge the three acts respectively but all eight do sterling work, keeping us on track in this strangest of journeys.

Intense, intelligent, insane – I am utterly in love with a piece of theatre that can bamboozle me so effectively and yet still leave me hungry for more. I want to read Mr Burns, I want to see it again, I want to read what other people thought, I want to debate with people who didn’t like it and try to get them to see they’re wrong (because naturally I’m right!) I don’t make pretence that it is a perfect play, many will find it alienating and it does perhaps push a little far in its final stretch but for me, it is challenging in the most exciting way and there’s something wickedly delightful in seeing audiences, especially in the N1 postcode (formerly mine), having this much asked of them.