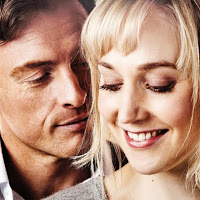 "There's something scary about stupidity made coherent"
Consistency or stuck in a rut? Once again, the Old Vic presents a play set firmly in the 80s and advertised by posters featuring giant up-close portraits of its leading stars. Not knowing anything about The Real Thing did not prevent me from eagerly booking tickets when it was announced though, especially since I had loved Arcadia last year and the early casting news of Toby Stephens and Hattie Morahan filled me with joy. Described on the promotional material as an examination of the complex nature of love, art and reality and also as a modern classic, you’d think you couldn’t go wrong here, but how wrong I was to think that this would be the real thing for me though.
Set in London in the (early?) 80s, Henry is a successful playwright, married to his current leading lady but having an affair with another actress for whom he leaves his wife. He then ends up questioning whether this new marriage is indeed the ‘real thing’ but these issues extend to his professional life too as the question is continually posed about what is the most real, experiencing it for oneself or being able to write beautifully about it, even if it is happening to other people, ‘it’ ultimately being interchangeable for both art and love. It’s a bit tricksy in its format as one might expect from Mr Stoppard so you do need to pay attention from the outset.


Toby Stephens’ egotistical playwright Henry is smug, overly pleased with himself and always ready with a bon mot instead of actually dealing with anything and so turned me off from the outset. I saw little of what was meant to be so appealing about him, the humour did not hit my buttons (although most of the rest of the audience had a good old hoot) and since he dominates this play, both physically and literally, there was never any danger of me coming round to liking it. A speech about writing being like a cricket bat nearly brought the house down but left me cold, and the sense of his journey to feeling real emotion coincided nicely with my personal journey to caring less and less about what happened to him. The delicious Hattie Morahan felt a bit miscast for me here as Annie (perhaps it was because I’m more used to seeing her in a bonnet) but she failed to convince as a temptress, devouring new men and experiences with gay abandon. Together I felt little of their chemistry either.
I was disappointed to see so little of Barnaby Kay, having enjoyed his performance in A Streetcar Named Desire, but along with Fenella Woolgar as the other abandoned spouse, they both do well with very much secondary characters with limited roles, Woolgar actually managing to make her Charlotte (Henry’s first wife) more appealing than Annie! Tom Austen, Louise Calf and Jordan Young make up the cast in small cameos in the second act, but none are really given the chance to make much impact.
In an ugly white letterbox set, with sections that slide up to reveal different configurations of doors, bookshelves and windows to denote separate locations, the eye is drawn to two brown armchairs around which the actors throw themselves. They never move, meaning I found the evocation of a train carriage to be rather clunky and the whole staging seemed to be quite wasteful of the opportunities offered by the large stage: it feels like too big a theatre to effectively capture the type of intimacy suggested by the set. The pumping music punctuating the scene changes and the vaguely 80s-inspired costuming did little for me either.
I did not enter the Old Vic in a bad mood, but something about this play clearly struck a strong chord of dislike in me and I left feeling really quite bitter about a wasted evening in which I can honestly say I found no redeeming feature. There’s an awful lot of barefoot acting: I don’t know if this was significant but at least foot fetishists will enjoy it more than I did. I rather suspect I will be alone in this viewpoint, but the marital follies of a bunch of self-obsessed theatre types left me cold and The Real Thing is obviously not the play for me. Indeed, the only highlight was having Jamie Bamber and Benedict Cumberbatch in close proximity to me (although not together I might add).
Running time:2 hours 30 minutes
Programme cost: £4