"Is there no play to ease the anguish of a torturing hour?"

She's back!! I'm referring of course to Aunty Jean who popped down for the evening for some dinner and a little theatrical amusement. The play in question was A Midsummer Night's Dream featuring a reunited Peter Hall directing and Judi Dench as Titania, 40 years on since their last collaboration in these two roles. "The wisest aunt" casually regaled me with her (not sad) tales of seeing Peter Hall's redefining production of this self-same play and McKellen and Dench in Macbeth as we sipped some vile pinot grigio at the Rose Theatre in Kingston, anticipating the treats in store and giggling at the warning of the use of 'haze' in the performance.


The conceit is that Dench is actually playing Elizabeth I, as she does in a brief wordless prologue where she opens a performance of a play, who then materialises as Titania 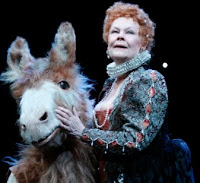 in the same dress. It's an interesting take which works almost entirely due to the warmth radiating from her performance. The scenes when she is bewitched are just delightful, her coos and chuckles with her paramour display all the ecstasy of a lust-fuelled passion simply through the strength of her verse-reading. She also displays some considerable stamina: at one point laying slumbering with her neck in a most awkward position for such a long time, and let us not forget she is 75 now, that I did worry for her joints: I don't think I could have stayed that still for that long, at least without falling asleep!

ch like the recent RSC Twelfth Night, despite all the publicity, this isn't a star vehicle, it is an ensemble piece and it is much to Judi Dench's credit that her stellar turn complements and is complemented by the performances around her. Indeed it is Rachael Stirling who emerges as the star of this production, as Helena she proves just why she recently received a Olivier nomination, speaking with impassioned drama and a great warmth. She also gives a masterclass in reactive acting during the lovers' quarrels and particularly whilst watching the rude mechanicals: a stunning performance and a true talent.

The other lovers are good: Annabel Scholey's Hermia is perky and Tam Williams and Ben Mansfield interact very well as the duelling Lysander and Demetrius, especially given that these are not particularly well-drawn characters. Elsewhere, Oliver Chris' Bottom is brilliant, his swagger with the ass's head at the end of the first act brought the house down and along with Leon Williams' Flute plays possibly the funniest Pyramus and Thisbe death scene I've ever seen.

The set by Elizabeth Bury initially looks a bit bleakly modern but as we enter the forest, it is enhanced to gorgeous effect by Peter Mumford's lighting and a shadowy arboreal world is created which fitted the mood carefully.

This is by no means a perfect production. Reece Ritchie's frantic Puck is often to

o focused on the physical manifestation of his impishness to deliver his lines clearly enough, he just needs to slow down a bit. And whilst Charles Edwards' dashing Oberon was excellent, his rueful regret at the way his follies have played out being particularly moving, one couldn't help but wonder why they didn't cast someone who looked a bit older to partner Dench. (Maybe this was meant to reflect Elizabeth's penchant for surrounding herself with younger men?)

In the end though, this is as classy as English theatre gets. A comfortable, familiar treat, there's nothing controversial here nor should there be. A traditional, Elizabethan production in which the focus is squarely on good acting and strong verse-reading and a welcome opportunity to witness a truly great actress with absolute mastery of her craft.


Running time: 2 hours 40 minutes (with interval)
Programme cost: £5
Note: Beware the ushers! As we walked into the auditorium, with about 15 minutes before the start, we were hectored four times in the space of three minutes to switch off our mobiles as I was finishing off a text message. Such jobsworthiness is never attractive and was entirely unnecessary, send 'em on a training course I say.