Review: Prick Up Your Ears 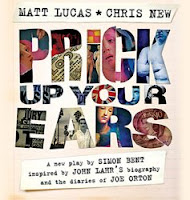 Despite its name, Prick Up Your Ears is actually billed as a new play by Simon Bent, which uses Joe Orton's diaries and John Lahr's biography to take a closer look at the private lives of the playwright Joe Orton and his lover Kenneth Halliwell. Starting in 1962, the play follows the journey of the two men who dreamt of dominating the literary world together and how their paths took wildly differing turns, culminating in a brutal and tragic end.
The action here takes place solely in the Islington apartment that Orton and Halliwell shared, with occasional interjections from their landlady Mrs Corden. Bent's take on the story is that as Orton's star rose he was more than ably helped by Halliwell, indeed his success was dependent on him, and that formed the crux of their relationship, giving extra meaning to Halliwell's subsequent depression and Orton's treatment of him. I'm not sure that this interpretation worked for me and to be honest, I remain to be convinced.
Matt Lucas has a difficult job here in managing the balancing act of rehabilitating Halliwell's character, given the well-known bloody ending to the story. There are shades of previous performances in his comedic earlier scenes, but given the sheer number of 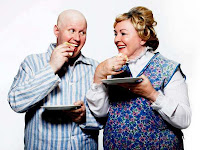 characters covered in his shows, this is perhaps inevitable and did not really detract from the show here. I felt Lucas was ironically much better at portraying the darker shades of Halliwell psyche, his descent into madness is convincingly played, but I did end up feeling a little uneasy about how the audience was being asked to feel sorry for a murderer which was how I felt the show was leading me.
As Joe Orton, Chris New is excellent. His performance exudes a great physicality and sexuality which goes a long to explaining th hold Orton had over Halliwell, and he did a great job in showing the increasing disillusionment felt towards his partner. Gwen Taylor as the landlady Mrs Corder has most of the funny lines of the play, but her quality shines over and above the writing as her comic timing is pure class: she is mercilessly funny with her every word and movement and basically steals every scene she is in.

The set is quite ingenious: as the play progresses, we see the collage encroach ever further over the apar 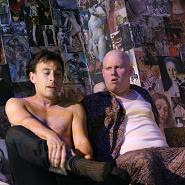 tment, creating a darker, more ominous atmosphere mirroring Halliwell's mood. Scenes are punctuated with short blackouts, during which panels are slid back to reveal more of the collage and this was so smoothly done, it was hard to see how they had managed it, impressive!

The play speeds by quite niftily, the three actors have good chemistry together, and there is a great sense of claustrophobic foreboding about the whole production, but for some reason I have to say it just didn't click with me. Given its proximity to other material with a similar name, for me it just didn't offer any new, convincing food for thought.